The greyhound or "gazehound" is the oldest pure breed in the world. By nature, greyhounds are domesticated and docile animals.

Greyhounds boast the most ancient lineage of any domesticated animal and archaeologists agree they were household pets more than 7000 years ago. Later records date the earliest speed contests between pairs of greyhounds around 2500 B.C.

Murals of ancient Egypt and Greece include many figures of an animal which was highly prized by Kings. In common with many early Egyptian Kings, Cleopatra was a fancier of greyhounds. Later, under another famous Monarch, Queen Elizabeth I, greyhound racing in England was established, and became known as the "Sport of Queens." It is generally accepted that today's greyhound breed was developed in England, as the English were the first to establish a Greyhound Stud Book in 1882 and from there the breed spread to other countries.

Greyhounds became popular in frontier America in the early 1800's, arriving with English and Irish settlers. During this period Mid-Western farmers, overrun with jackrabbits, utilized the greyhound to control this menace to their crops.

The most famous early American greyhound enthusiast was General George Custer. He spent many hours breeding and training his prized pets; his greyhounds were used primarily for hobby and hunting antelopes.

Greyhound track racing, as we know it today, began with Owen Patrick Smith's invention of a mechanical lure around 1912. He is generally recognized as the father of modern greyhound racing. The first track in America opened in 1919 in Emeryville, California. Other early 1920 locations include Butte, Montana; Kansas City, Kansas; Chicago, Illinois; Madison, Wisconsin; and San Francisco, California.

Greyhound racing did not gain popular recognition or public support until 1924. It was the transition from daytime to night racing which became the catalyst for future popularity and profitability. Night racing got its start at an indoor track located in Atlantic City, New Jersey. The introduction of night racing attracted the blue-collar worker and, according to many, was the biggest factor in greyhound racing becoming a major sports and entertainment attraction, ranking sixth amongst spectator sports in the United States.

Greyhounds, with jockeys, believe it or not, actually took place at race tracks across America during the 1930's. Of course, "Jockey's" were not human, rather specially trained monkeys. 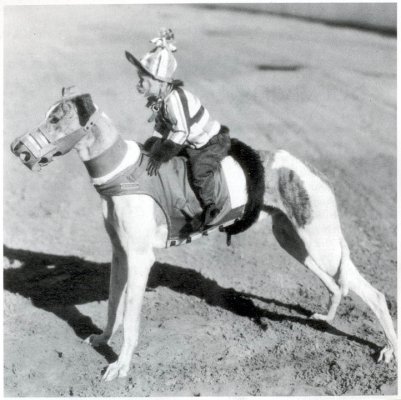 Loretta and Charles David trained greyhounds and monkeys together so they became comfortable with each other, touring the country, entertaining race fans. The monkeys were dressed in colorful silk outfits strapped to their greyhounds. Intensely competitive, they used their tails as whips and attempted to grab and hold other greyhounds during the race. Fans enjoyed the special races and the animals loved performing. Caliente, Mexico, renewed the tradition briefly in 1950.